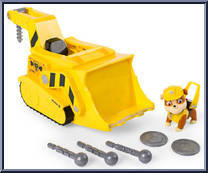 Enlarge
Zoom on land and soar through the air with Flip & Fly Rubble! Put this 2-in-1 vehicle in bulldozer mode and kids can join Rubble (figure included) as he races to the rescue! For airborne adventures, use the handle to lift and transform from bulldozer to flyer! Once you and Rubble are gliding through the air, use the launchers to release discs and wrecking balls that move objects and save the day! With bravery, friendship and teamwork always in mind, Rubble's jet comes with a rescue hook to pick up pups in danger and lift them to safety! Collect Skye, Chase, Marshall and Rubble to form your own pup squad! Head straight into adventure with Flip & Fly Rubble's Transforming Vehicle!

Features
Flip & Fly Rubble brings all the excitement and adventure of the Paw Patrol to life! Kids can have fun with this 2-in-1 vehicle, transforming it from a bulldozer to a jet!
Use the built-in disc launcher and wrecking ball launcher to help Rubble get out of tricky mid-air situations!
If a pup is stuck, Flip & Fly Rubble's rescue hook comes in handy. Use it to pick up pups and airlift them to safety!
Flip & Fly Rubble is for kids aged 3+. Collect Skye, Marshall, and Chase to assemble your own airborne Paw Patrol! 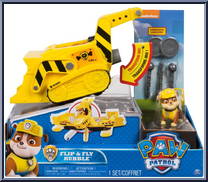