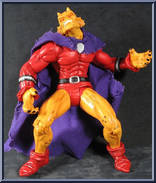 Enlarge
The Demon Etrigan was summoned from the underworld in A.D. 560 by his half brother Merlin, King Arthur's sorcerer, to battle the evil forces of the sorceress Morgan Le Fay. After Le Fay's defeat and in order to control him, Merlin bound Etrigan body and soul to a peasant named Jason Blood, a man made immortal by the unholy union. Blood is able to call forth The Demon whenever he chooses, but the powerful and evil Etrigan forever seeks freedom from Blood's control so that he can be free to wreak havoc upon the world.
Add to Collection - Add to Wishlist - Contribute 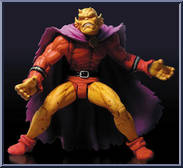 Enlarge
User Collections
The following users have Demon in their collection:

Searching...
User Wishlists
The following users have Demon on their wishlist:

Searching...
Reviews of Demon Toy Series
5.00 stars from Doogiem
DC direct line is full of awesome sculpts of some of the best characters in the DC Universe. This is true of the Demon figure from the Other Worlds subset. This figure has the expression of a tormented Demon and is posed ready to grab the first thing that walks by....[See More]
Subseries from Other Worlds Toy Series
Contribute
The good folks here at Figure Realm try to give you accurate, unbiased, and most importantly, free information on action figures all day everyday! But of course, reviews and an occasional rant can only go so far, that 's why we encourage you to contribute! We're trying to build the largest, most informative, and simplest to use action figure gallery on the planet for every person out there to enjoy. Whether you want to know how many figures are in a series or the name of a certain figure or even if you just want to stare awestruck at all the pretty colors, galleries help everyone. What can you do to help? Glad you asked!