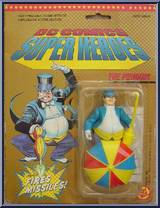 A daring series of robberies that have Gotham Police baffled have been attributed to that foul fiend, The Penguin. Batman's enemy has been known to have control over all the birds in the air, commanding them to commit crimes for him! He never goes anywhere without his deadly trick umbrellas, which can fire bullets, throw flames, and even serve as a bulletproof shield! The bumbershoot-bearing bandit may look comical, but his appearance belies a vicious criminal mind!
Add to Collection - Add to Wishlist - Contribute 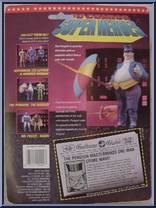 Enlarge
User Collections
The following users have Penguin in their collection:

Searching...
User Wishlists
The following users have Penguin on their wishlist: