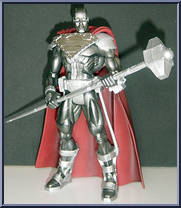 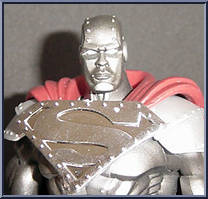 Enlarge
User Collections
The following users have Steel in their collection:

Searching...
User Wishlists
The following users have Steel on their wishlist:

Searching...
Reviews of Steel Toy Series
4.50 stars from Boredamned
Let's begin with a back story! (Optional read) Once a year I was allowed a present for christmas under $10 (I know; we were poor). Until I was the age of 14. I bargained. No present for one year, and next year a $20 present. I went one Christmas without a present intent with one figure in mind! DC SUPER HEROES STEEL! (3 months later my cousins thought it'd be cute to bathe him then put him in a sauna...the microwave) I re bought him last year used. He was broken. Left arm in fact. Completely broken off the peg. S piece was off the chest as well (idk how). I did some light work on it. My aunt in the Philippines was a huge superman fan. She got me into dc with my very first comic series! Death of superman. Doomsday. In this story line 4 people step up to the mantle after our brave...[See More]
5.00 stars from pock63
The first thing I want to say about this figure is WOW! This figure is one of the best in my collection. Thsi figure has all the basic DC Universe joints. His schulpt is great. The paint job could be better but the lack of shading doesn't hurt him much. One of the things wich makes this figure great is the cape! He has a thick flowing rubber cape much better thatn the one that came with Super Man. If you are loocking to buy this figure that by all means do! If youre not loocking to buy this figure I still say by all means do because you will loveit!...[See More]
4.50 stars from Henchmen4Hire
Has there ever been a bad-looking Steel figure? No, never. And this DCSH version is the best so far! Steel stands 6.5 inches tall, in-scale with the other DCSH figures. I thought this fig would just be a repainted Superman but the muscles are larger and it has sculpted armor on the boots and some bolts on the stomach, the basic color-scheme is flat-silver and dark gun-metal. The rivets and armor plates look great. -He has a rubbery belt with two "boxes" on either side. They have flexible ribbed hoses that connect to the top-side of the boots. Is this his flight-system? I don't remember Steel ever wearing this belt, but then again I've only seen him a few times in comics so what do I know :} I think he would look better without it though. -The left forearm has that big manacle-thing he...[See More]
Subseries from DC Super Heroes Toy Series
Contribute
The good folks here at Figure Realm try to give you accurate, unbiased, and most importantly, free information on action figures all day everyday! But of course, reviews and an occasional rant can only go so far, that 's why we encourage you to contribute! We're trying to build the largest, most informative, and simplest to use action figure gallery on the planet for every person out there to enjoy. Whether you want to know how many figures are in a series or the name of a certain figure or even if you just want to stare awestruck at all the pretty colors, galleries help everyone. What can you do to help? Glad you asked!