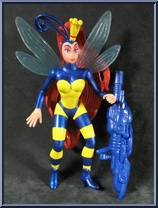 Enlarge
Earthworm Jim's Main Squeeze - or so he Thinks!

Zurb, my diary, please... Ah, here we are.
Adventure 74312. Today I saved the universe from my big fat facially-challenged sister, Queen Pulsating-Bloated-Festering-Sweaty-Pus-filled-Malformed-Slug-for-a-Butt. She's got that scepter of power, but I've got goodness on my side - and I'm a purebred Insectickan. That means I have the strength of ten men. As I have vowed in the past, my sister will mistreat me no more. Today, that wench tried to bring horror to all decency again. I was just finishing chowing down while Earthworm Jim - he's kind of my boyfriend - was battling my foul, seeping sister. She had summoned Psycrow and Professor Monkey-for-a-Head to put Jim in a worm lock. They were beginning to tickle his gums when I stepped in and launched a few Bug Discs with my Bug Launcher. Then my faithful servant and bodyguard, Zurb, started banging heads. Unforutantely, Zurb knocked Earthworm Jim unconscious, too. So I whipped out my Really INTENSE Insectoid Gun and let 'em have it - boy, what a mess! Just as I was searing the bad boys' behinds, Earthworm Jim came out of his daze and said something heroic like, "I'll save you, my festive polka of joy!" But then he passed out again. After I kicked some mutant butt and made the universe a safe place to walk at night, I went home to do my hair. So, dear diary, I'm still trying to bring an era of perfect peace to my home planet of Insecticka. Maybe I'll have Earthworm Jim help me tomorrow. Oh merciful mandibles! Is that a cow?! SPLAT!
Add to Collection - Add to Wishlist - Contribute 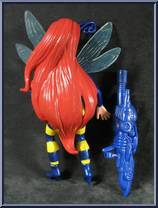 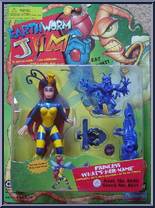 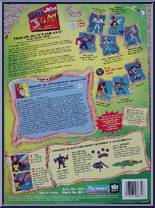 Enlarge
User Collections
The following users have Princess What's-Her-Name in their collection:

Searching...
User Wishlists
The following users have Princess What's-Her-Name on their wishlist:

Searching...
Subseries from Earthworm Jim Toy Series
Contribute
The good folks here at Figure Realm try to give you accurate, unbiased, and most importantly, free information on action figures all day everyday! But of course, reviews and an occasional rant can only go so far, that 's why we encourage you to contribute! We're trying to build the largest, most informative, and simplest to use action figure gallery on the planet for every person out there to enjoy. Whether you want to know how many figures are in a series or the name of a certain figure or even if you just want to stare awestruck at all the pretty colors, galleries help everyone. What can you do to help? Glad you asked!