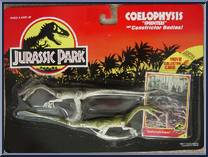 Figure Instructions:
Bend neck and tail into a fighting position.
Make him grab the human to recreate an attack.
Add to Collection - Add to Wishlist - Contribute 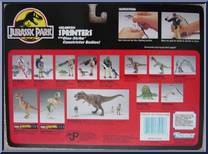 Enlarge
User Collections
The following users have Coelophysis in their collection:

Searching...
User Wishlists
The following users have Coelophysis on their wishlist:

Searching...
Reviews of Coelophysis Toy Series
4.00 stars from JP_toy_freak
Now I just received this toy off another site a while back, and I was deeply impressed with it. It has good color choice, is perfectly in scale, and is down to fingernail perfect. It has an awesome feature, which is its constrictor bodies, and my son loves it. The green one can be put into a sitting position, and is really good for wrapping around a man. The standing up one is good, for "normal" dino play. Its legs are not bent, but are straight. It has a perfect blue shade of coloring, while the other one has a perfect shade of green, and a nice little blob of purple, as if it was a courtship device. And this toy is almost perfect for dioramas. Since it has the constrictor, bendy bodies it can be put into a lot of different poses to fit the dioramas scene. Its also a good toy to buy to...[See More]
4.00 stars from Tyrannosaur22
It doesn't look like much does it? But believe it or not, these are really topnotch figures! Although not show in the film, they're still great toys. And as a bonus, you don?t get just one of these; you get two per card! The figures? colors a good (a greenish-white color mix) and they have two different stances! Their articulation is amazing; they're complete posable, with ?Constrictor? action for a lot of playing! Sculpt :: 8 -- 10 Colors :: 8.5 -- 10 Action :: 8 -- 10 Sound :: N/A Overall :: 8 -- 10 ...[See More]
Subseries from Jurassic Park Toy Series
Contribute
The good folks here at Figure Realm try to give you accurate, unbiased, and most importantly, free information on action figures all day everyday! But of course, reviews and an occasional rant can only go so far, that 's why we encourage you to contribute! We're trying to build the largest, most informative, and simplest to use action figure gallery on the planet for every person out there to enjoy. Whether you want to know how many figures are in a series or the name of a certain figure or even if you just want to stare awestruck at all the pretty colors, galleries help everyone. What can you do to help? Glad you asked!