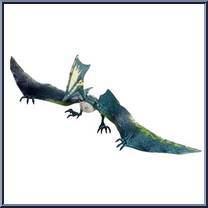 Enlarge
User Collections
The following users have Tapejara in their collection:

Searching...
User Wishlists
The following users have Tapejara on their wishlist:

Searching...
Reviews of Tapejara Toy Series
4.50 stars from Mr-X
What can I say about this guy other then he’s and obvious repaint. He is basically a Pter with a semi new head extension and new feet. Sadly, he still has the same clunky flaws. As stated, he is still oversized. I’m not sure what they were thinking when they made these guys so big but it wasn’t too good. Anywho, his sculpt is still mostly the same as before. Now however, he has two open feet instead of one open and one clawed and his head has extra skin. He still has the same sound as before. The DD is still in the same place, designed as a rib and gives off the exact same screech. The head roar is also the same, push down, head opens and a scream comes out. The biggest difference here is the coloring. Now his body is a really dark green with a white underside. Across various parts of...[See More]
Subseries from Jurassic Park III Toy Series
Contribute
The good folks here at Figure Realm try to give you accurate, unbiased, and most importantly, free information on action figures all day everyday! But of course, reviews and an occasional rant can only go so far, that 's why we encourage you to contribute! We're trying to build the largest, most informative, and simplest to use action figure gallery on the planet for every person out there to enjoy. Whether you want to know how many figures are in a series or the name of a certain figure or even if you just want to stare awestruck at all the pretty colors, galleries help everyone. What can you do to help? Glad you asked!