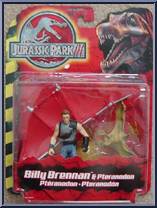 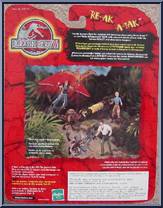 Enlarge
User Collections
The following users have Billy Brennan & Pteranodon in their collection:

Searching...
User Wishlists
The following users have Billy Brennan & Pteranodon on their wishlist:

Searching...
Reviews of Billy Brennan & Pteranodon Toy Series
3.00 stars from iceIceBa
Billy Brennan is a decent figure. He looks a good amount like his movie counterpart and is nicely detailed with a decent paint job. With that said however, the figures annoying pose and weird Hang-glider bog down the figure a little bit. With the Hang-glider not only not being movie accurate, but also just looking stupid when attached to the figure. The Pteranodon hatchling meanwhile is pretty neat. Having a cool paint job alongside some neatly designed feet that can cling on to Billy or his Hang-glider. Overall, this is a solid set. Billy’s a flawed but overall decent human figure. Whilst his Hang-glider leaves a lot to be desired and the Pteranodon hatchling is pretty cool....[See More]
3.00 stars from Wasacoolday
This is an interesting figure. Though it still stands in an awkward position, like most of the JP III human figures, the left arm with additional movement possibilities is a plus. The figure is well painted, though the asymmetric detailing is a bit weird: why is he only wearing one glove and shoulder cap? The answer lies in his relation to the Pteranodon figure, which can grab his left arm, so that it looks like Billy is holding it and looking at it, while the animal looks back at him. Sort of. It works nice when he’s holding him, but hinders playability options, since both figures are in an odd position when cut loose from each other. The glider is nothing special. It’s little detailed and its colours are pretty dull. The glider can be attached to Billy’s back, but when it is, it...[See More]
4.00 stars from Mr-X
The JP3 line could have come out really good, in had all the makings of a good line. Hasbro decided to ruin it though. All the humans were shrunk down along with the few vehicles so now the new figures didn’t make it much past the waists of the old figures. To many fans and myself, this was a major letdown. Billy Brennan, Dr. Grant’s student assistant on his digs, comes at about 3 1/2 inches tall ,very short. He looks nothing like his movie counterpart. He comes with two things, a glider and a Pteranodon. Both are ok things, the glider is the right scale and fits onto his back via peg and hole. The Pterdnodon has been sculpted so that its legs can hook around Billy's arm and hold on to him. Colors are ok. Billy comes wearing a sleeveless grey shirt and blue jeans. Over the grey shirt he...[See More]
Subseries from Jurassic Park III Toy Series
Contribute
The good folks here at Figure Realm try to give you accurate, unbiased, and most importantly, free information on action figures all day everyday! But of course, reviews and an occasional rant can only go so far, that 's why we encourage you to contribute! We're trying to build the largest, most informative, and simplest to use action figure gallery on the planet for every person out there to enjoy. Whether you want to know how many figures are in a series or the name of a certain figure or even if you just want to stare awestruck at all the pretty colors, galleries help everyone. What can you do to help? Glad you asked!