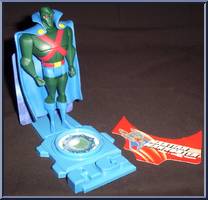 Enlarge
As is common among telepaths, the Martian Manhunter is an intensely silent figure. Even in his darkest moments, his mood is often reflected only the expression in his eyes. When he speaks, others listen. His accent is deep and indescribable. Possibly the most highly regarded by his JLA peers, he is a founding member of every incarnation of the team, an alien whose loyalty to his adopted world is beyond words. J'onn prefers to use his shape-changing powers to maintain several identities so he can move among the humans he admires so much. J'onn is the only Leaguer to whom Batman defers. Green Lantern is his favorite of the group.
Add to Collection - Add to Wishlist - Contribute 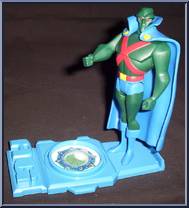 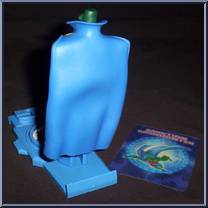 Enlarge
User Collections
The following users have Martian Manhunter in their collection:

Searching...
User Wishlists
The following users have Martian Manhunter on their wishlist:

Searching...
Subseries from Justice League Toy Series
Contribute
The good folks here at Figure Realm try to give you accurate, unbiased, and most importantly, free information on action figures all day everyday! But of course, reviews and an occasional rant can only go so far, that 's why we encourage you to contribute! We're trying to build the largest, most informative, and simplest to use action figure gallery on the planet for every person out there to enjoy. Whether you want to know how many figures are in a series or the name of a certain figure or even if you just want to stare awestruck at all the pretty colors, galleries help everyone. What can you do to help? Glad you asked!