Lord of the Rings Universe

Lord of the Rings - Return of the King

Enlarge
Forbidden to join the Men of Rohan in battle by her uncle, King Theoden, Eowyn takes on the armour of a young soldier and hides her feminine features beneath a sturdy helm. Thus garbed, and armed with her bright sword, she takes a horse and rides to war in secret as a aman of the cavalry of Rohan to join the fight for Minas Tirith. Though raised a lady, Eowyn is no stranger to bearing arms. Her skill with the blade is no less than her King's soldiers' and, when all others are dead or gone, it is she who comes bravely to his aid.
Add to Collection - Add to Wishlist - Contribute 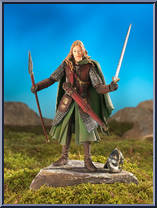 Enlarge
User Collections
The following users have Eowyn (Armor) in their collection:

Searching...
User Wishlists
The following users have Eowyn (Armor) on their wishlist:

Searching...
Reviews of Eowyn (Armor) Toy Series
4.50 stars from Deaditor
I owe a lot to this figure as a customiser for the hobbit Dwarves, but it is also just a decent figure. She’s highly detailed has a sword a removable helm and the spear Eomer tosses at the mumak rider for some reason. My only complaints about her is the vinyl skirt and cloak which are bulky and have a sometimes sticky gloss, her eyes are always painted off looking sideways so a headswap with the coronation Eowyn is something I’d recommend and lastly no shield! I know she just picks it up but still it’s iconic in design. Overall think this is a nigh on perfection figure with some minor issues that can be remedied....[See More]
5.00 stars from Dorion Thurin
Of the previous two from The Two Towers and the one as an exclusive in The Coronation Pack this figure of Eowyn I find best. This one comes with amazing accessories and the details are highly fashioned, a beautiful design and such a good example of Rohan's culture. She reselmbles pretty much Miranda Otto. This figure is a valuable replica of Eowyn in the battle of The Pelennor Fields. Made of really delicate soft plastic, her golden hair covers half of her back. Rohan's colors dominate her clothing. A green cloak, an armor of dark red and dark brown. She comes with a beautiful black helmet decorated with nice 'rohanish' motives of gold with silver. The sword is nicely articulated, a silver blade of dark red handle in a movable dark red sheath nicely made of soft plastic over her...[See More]
4.90 stars from f
Now...we finally get a great eowyn after the lousy two towers one. This one is actually worth the price. Comes with full armor, helmet, spear, and a sword. the spear is a bit delicate - careful with it, might snap - but the action figure is cool. Pretty good agility and movement, although she has the annoying attack action like every other good lotr action figure. Thats probably the only downfall. Much better than two towers predecessor. Recommend it if you want an eowyn....[See More]
Subseries from Lord of the Rings - Return of the King Toy Series
Contribute
The good folks here at Figure Realm try to give you accurate, unbiased, and most importantly, free information on action figures all day everyday! But of course, reviews and an occasional rant can only go so far, that 's why we encourage you to contribute! We're trying to build the largest, most informative, and simplest to use action figure gallery on the planet for every person out there to enjoy. Whether you want to know how many figures are in a series or the name of a certain figure or even if you just want to stare awestruck at all the pretty colors, galleries help everyone. What can you do to help? Glad you asked!