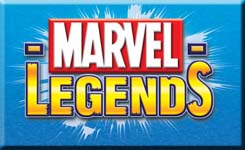 Idolized by billions and hated by more villains than you can shake a radioactive stick at, the Marvel Legends line of toys has successfully launched a new craze in the world of collecting everywhere. These 6-inch scale Marvel heroes and villains are amazingly detailed and super-articulated and earn the title of action figures. Alternate suits, stands and bases, a free comic, and sometimes even pieces to build much larger figures are just some of the reasons to buy from this line as these items are included in every package!

The Marvel Legends line is a spin-off of the Spider-Man Classics line also produced by Toy Biz. At its inception in 2002, the Marvel Legends line took over the clamshell packaging and the included comic book that had shipped with the Spider-Man Classics line. The first Marvel Legends series included representations of the Hulk, Captain America, Iron Man, and Toad. In 2005, Toy Biz introduced the "Build-A-Figure" (referred to as a "BAF" in the collector community) to the Marvel Legends line, starting with series 9. Each figure in the series was packaged with a piece of a larger figure. A consumer who bought each figure in the assortment would then have all the complete components to assemble a character unavailable in individual packaging.