Please wait...
Hey guys! This is a very simple tutorial. It kinda piggy-backs off of another tutorial for fitting heads to new bodies, but I figured I'd show it anyways. Involves hot glue, a dremel, and possibly Exacto knives, so be very careful or get a parent's assistance. 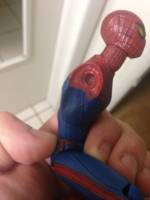 Enlarge
Look mom, no hands!
Pop those limbs out like a Wookie! 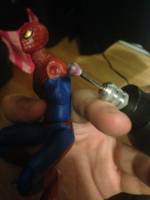 Enlarge
Everyday I'm Dremeling
Hollow out those peg holes, and be careful not to screw it up! 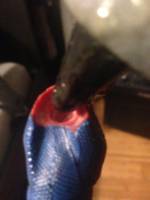 Enlarge
Let me get some hot stuff, baby!
Put a tiny squeeze of hot glue in their and push the peg in. 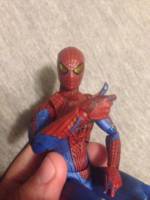 Enlarge
Thumbs up, bro!
Now Spidey's arms stay in their sockets and he feels great! 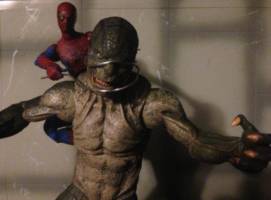 Enlarge
Stop this or you don't get to be in Suicide Squad! Oh wait a sec...
Now Spidey is ready to save New York!
First, you wanna pop those little arms out (Sorry Spidey). You'll want to hollow out the arm sockets with a dremel using a similar bit to the one in the second photo above. Be very careful when doing this to not damage any other parts of the figure, because that would be depressing. Once you have done that, you'll want to put a dot of hot glue in the socket and place the arm in right away. Hold it down all the way in for a fee seconds for it to harden a bit. Once it begins to harden, run it under some cold water to finish it off and begin twisting the arm around to move it. Do it gently at first so as not to damage the peg, and also make sure to test all the articulation for any obstructions. If there is any excess glue causing any major issues with articulation, you can get in there with an Exacto knife or tiny dremel bit to cut it down to size. But do so at your own risk, for you could do some damage to the figure if you aren't careful. Or you could use a tiny flathead screwdriver and/or an Exacto to loosen the glue up and pull the arm out and start over using a smaller amount of glue and repeating the above process until you shape it to your liking. Now, your MAFEX Spidey and Dark Knight figures don't lose their arms every five seconds. Hope this was helpful!

Disclaimer
Customize at your own risk!

Customizing can be a fun, but dangerous hobby. These tutorials are contributed by other customizers. Some of the things recommended in the tutorials may be dangerous, such as the use of boiling water or sharp objects. You shouldn't attempt anything mentioned without adult permission and supervision. Figure Realm and/or the authors of the tutorials are not liable for any injuries or damages occurring from any attempt to follow suggestions in these tutorials.